This blog is first, and foremost, a platform for me to communicate my science and to share my world with you all. With that being said, it’s important to consider the impacts that current events have on society as a whole, since our science only exists because the world around us does too.

Unless you’ve been living underneath some very large, fortunate rock, you’re aware that Donald Trump is the president elect of the United States of America. I (and many, many others) are quite alarmed by this at many different levels: as a person of color, as a member of the LGBTQ community, as a scientist. As impartial and objective science supposedly is, scientists can, are, and should be partisan (there’s definitely going to be more on this in the future). It’s no secret which candidate most scientists backed in this last election: the one that believes that climate change is a real and human driven phenomenon, the one that doesn’t believe that vaccines cause autism, the one that does not want to slash scientific funding. And unfortunately that was the candidate who lost.

Not 24 hours after the election, word of Trump’s plan to appoint Myron Ebell as head of the EPA was announced, solidifying many environmentalists’ worst fears. Mr. Ebell is a notable climate change skeptic and has been a vocal opponent to the Clean Power Plan, a bill introduced during President Obama’s administration to drastically reduce emissions from electricity generation (which greatly curtails the coal industry). That was just the first of many announcements of key members of Trump’s cabinet and staff – most recently including Steve Bannon as chief strategist, a noted anti-Semitic white nationalist. Considering that it’s been less than a week since the election and so much has already been stirred up, it’s no wonder we all feel worried about the future of science in America. And that’s not to say the other looming implications of Trump’s presidency aren’t terrifying as well: a step back in human rights for ethnic and religious minorities (particularly Muslim people), transgendered people, the disabled, and women, just to name some of the groups at stake.

While the wound may still be fresh, there’s already been an outpouring of the community around the world and online. People are reaching out to each other with affirmations: you are valued, you are safe, and we will get through this together. Dr. Josh Drew at Columbia University wrote an open letter to his students on the importance of continuing their work in environmental science. Dr. Meghan Duffy of the University of Michigan wrote a beautiful piece reminding all of us to say ‘Yes’ to meaningful goals beyond our own research, which may have larger impacts in the long run. Dr. Terry McGlynn from Cal State Dominguez Hills, wrote a fantastic call to protecting those who are most vulnerable in this time. Dr. Andrew Thaler, editor in chief at Southern Fried Science, wrote a Mandate for Ocean Outreach, a call to arms for all scientists to critically think about how to fix our shortcomings in bridging science to stakeholders. I highly recommend reading these pieces, and any others that you can find.

While I am not nearly as established, knowledgeable, or eloquent as these writers, I do want to throw my own voice into the mix, particularly as one vulnerable person to another. To my brothers and sisters worried about the future: the bravest thing to do right now is to be yourself, your truest self, and then double down on it. It’s a scary time to be gay, or Muslim, or Black, or a woman, to be yourself, but now is the most important time to be all those things and more. Be everything it is that racist, homophobic, white nationalists hate most.

It’s petty of me, but I fully believe in spiteful pleasure, finding happiness in defiance to those that hate you. Take heed in the fact that the powers that will be are so threatened by the mere thought of you that they felt it necessary to take the White House, the House, and the Senate, in order to address your existence. That’s how much power you hold over them. By simply existing, by continuing to live your life despite whatever it is they try, you are partaking in the biggest act of rebellion possible. So live your life as a person of color, as a woman, as a member of the LGBTQ community, as a Muslim, as yourself, with twice the commitment: once for you, and once more for them. Know that I’m right there with you, along with 61 million other people. 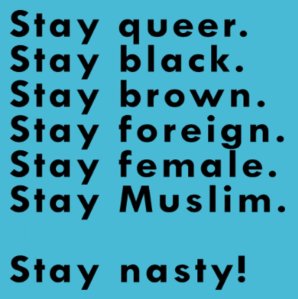 Many thanks to Kevin Kohl for use of his graphic, which was inspired by a tweet from Fryda Wolff.