After working with the same laboratory animals for years, one gets accustomed to the regularity of the same species, from the same conditions, over and over again. But every once in awhile, those same, highly controlled and selected lab species can still surprise you. Considering how our lab uses thousands of fish embryos for our research, with a little luck, we get surprised more than just occasionally. This is a photo of Lil’ Spencer, a Japanese medaka (Oryzias latipes) larva, just after hatching as a control fish in one of my experiments. It’s immediately obvious what makes Lil’ Spencer so special: her (their?) two, fully formed heads (eyes, brain, mouth and all), emerging from a single body. Also present, but not quite visible from this view, is a single, bulbous and misshapen heart, four pectoral fins (the inner two which constantly knock against each other), and a bent spine. 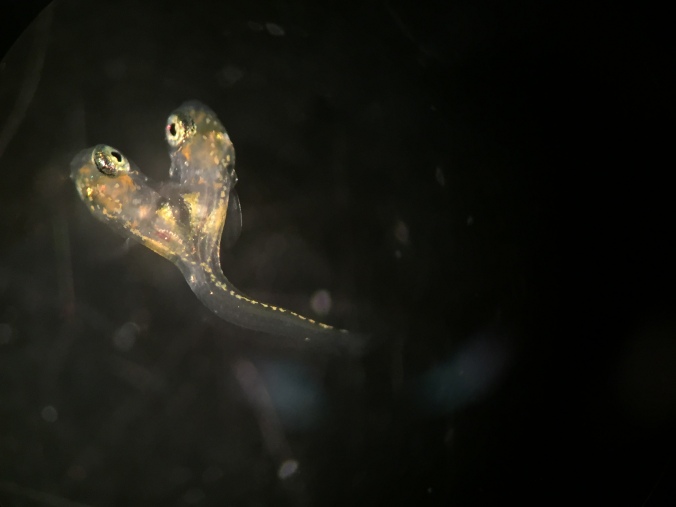 We weren’t able to pinpoint her/their exact mutation, but based on developmental studies in zebrafish and Xenopus frogs, it’s likely that there was a major mutation in the anteroposterior organizer, which is an important set of cells that controls regional differentiation and body axis patterning during early development. Manipulations of signaling molecules like β-catenin and bone morphogen protein (BMP) and pathways such as canonical and non-canonical Wnt pathways have produced a myriad of altered fish development, including secondary body axes complete with their own head! Unfortunately, Lil’ Spencer died a week after hatching, her body unable to support a heart too large and one head too many. But their short time in our lab served to remind us that despite the expertise you gain, the simplest fish can still surprise you in delightful ways. We’re just waiting to see what life surprises us with next.